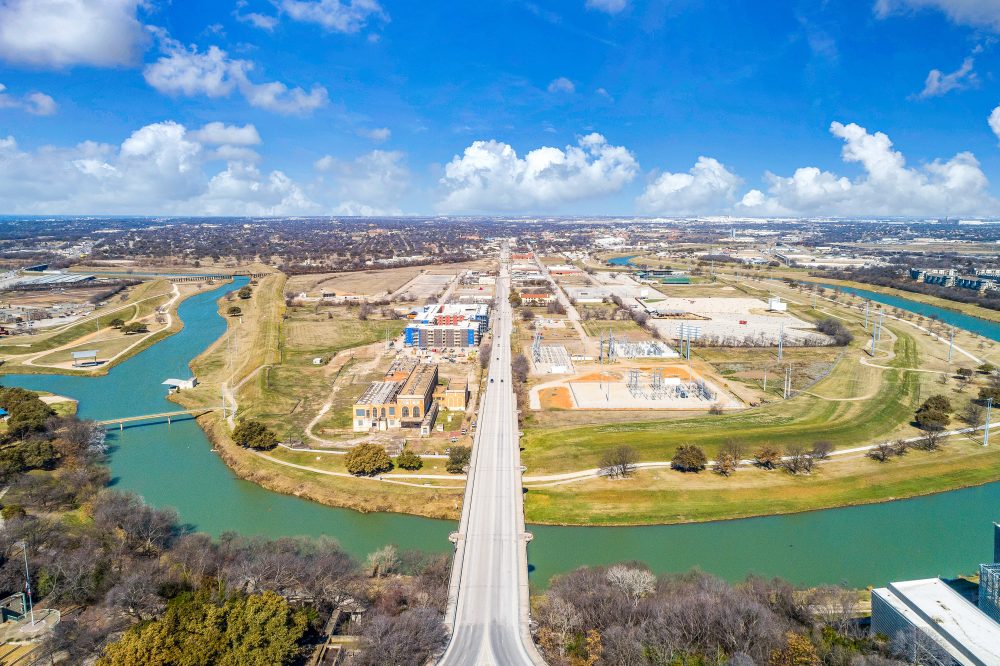 April __, 2021 – FORT WORTH – LanCarte Commercial, in collaboration with Panther Island Property Group, is proud to announce that the largest portfolio of privately-owned land on Panther Island is coming to market. Located just north of Downtown Fort Worth along the banks of the Trinity River, Upstream includes roughly 26 acres across ten parcels ideally suited for mixed-use, office, multi-family, and retail development, with future riverfront opportunities and ample frontage along the under-construction canal system.

Seven of the ten parcels feature frontage that will be adjacent to a planned canal or waterfront. At present, parcels 1-6 of Upstream are ready for development. The development of the final four parcels will correspond with later phases of the collaborative Panther Island/Central City Flood Project.

The announcement of Upstream coincides with renewed interest and activity within Panther Island, which at full build-out of the Panther Island/Central City Flood Project is planned to include over 12 miles of developable waterfront, the formation of a 33-acre lake, and the planning of over 10,000 mixed-income residences. Upstream and the larger Panther Island development plan represent the city of Fort Worth, the Tarrant Regional Water District, Tarrant  County, and the U.S. Army Corps of Engineers working alongside private businesses to transform the island into a picturesque and energetic hub of activity with the downtown skyline in full view. After a long wait, it’s finally Panther Island’s time to become the newest sought-after district in North Texas.

Mark Brock, Managing Partner of Lionhead Real Estate, the largest private investor on the Island, said, “We’re excited to be partnering with LanCarte in an incredible next chapter for Panther Island. We’ve been invested on Panther Island for over a decade, and having had the benefit of watching the progress from the sidelines, the marked increase in activity and completion of several key development milestones over the past few months are signaling to us that ‘lift-off’ moment has arrived.”

The city has invested in overhauled infrastructure, including new bridges connecting Panther Island to other Fort Worth districts, an expanded trail system, canals, and public art installations. In early April, the long-awaited White Settlement Bridge opened, increasing visibility and further connecting Downtown Fort Worth, Panther Island, and the Cultural District. With the Main Street Bridge set to open in June, the timing is ideal for the Upstream properties to come to market. Given the momentum of this public/private partnership and the infrastructure improvements across the area, Panther Island is poised to be a one-of-a-kind, breakthrough destination within Fort Worth.

As Sarah LanCarte of LanCarte Commercial put it, “We couldn’t be more enthusiastic about both Upstream and Panther Island. There are few locations like this anywhere – a riverfront opportunity directly across the river from the skyline of the U.S.’s 12th largest city. Panther Island’s time is now, and Upstream is poised to accelerate the momentum.”

Ahead of Upstream is the forthcoming grand opening of Encore Panther Island, a signature Class-A multi-family community featuring 300 luxury residences right on the under-construction canal system. This community will set the tone for future developments and provide an instant customer base for retail businesses looking to join Upstream.

If you’d like more information regarding Upstream, please reach out to Info@lancartecre.com.

LanCarte Commercial is a dynamic team of real estate professionals using entrepreneurial thinking to shift the paradigm of commercial real estate. From commercial investments to brokerage services, our innovative strategies maximize each opportunity and lay the foundation for a long-lasting partnership.